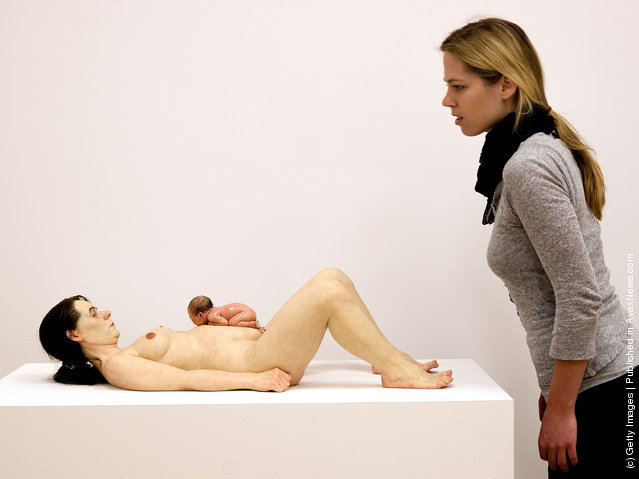 Mother and Child by Ron Mueck. Available at http://www.foros.net/

Thirty-one years ago on a hot December morning I gave birth to my second daughter. It was a rather unusual birth which began with membranes rupturing and a foot entering my vagina. Within an hour, two blue feet were at my vaginal opening where they stayed for a further two hours before she made her appearance. Contractions were regular but mild with the baby periodically retracting one foot and kicking off against my vaginal wall. Then, when in her ‘perfect position’, she descended. The descent took seven minutes from the umbilicus to the completed birth of the head. The birth was a pain free experience except for the uncomfortable extraction of both her arms by my doctor, as shown in the photograph below. It has taken me 26 years to understand the reason for that minor assistance with my birth.

I have been attending homebirths in Australia for 28 years but breech births did not really come my way until recently. I have supported a few women over the years to birth breech babies vaginally in hospitals, have had one undiagnosed homebirth breech in my practice, and attended two other homebirth breeches as second midwife. They were all good breech births. In 2009 I was involved in the launch of the DVD ‘A Breech in the System’ which documents a woman’s journey to give birth vaginally to a breech baby in an Australian hospital, where I was the supporting midwife.

Last year also brought me the stories of five breech deaths, with the babies being born in different settings across three different countries. These babies were all alive during the process of birth but once born, breathing was not established. From the umbilicus to the birth of the head, these babies took 13, 13, 15, 17 and 19 minutes.

The stories of these breech deaths really concerned me. It raised the fear of breech birth, which for me was – ‘what would I do if I couldn’t assist the baby through alive and well and, even though I had birthed my own breech baby vaginally, did I have the knowledge and skills to deal with the ‘unknown’ of breech birth?’ I decided to explore the teachings around breech birth and ask some experienced practitioners for their wisdom.

I began by contacting Maggie Banks, midwife from New Zealand and author of Breech Birth Woman Wise, and Andrew Bisits, obstetrician from Newcastle, Australia who has specialised in vaginal breech births for the past decade. I also consulted texts by Anne Frye 1 and Bruce T. Mayes 2. My questions were:

Frye’s extensive text examines the question of timing and she states, “both the medical and midwifery literature are rather spotty when it comes to the all important question of the timing…[from the birth of the umbilicus to the birth of the head]”.3 She cites well-known references which nominate a range from 3-5 minutes to 5-10 minutes to “the parameter rests entirely upon the condition of the baby”.4 Mayes, however, declares that 20 minutes may be a safe limit although most babies will be born within 10 minutes.5

This is all rather confusing. Is it three minutes, or 10, or 20? My initial training with John Stevenson suggested 5-10 minutes if the baby was previously uncompromised, so respecting a time frame similar to shoulder dystocia. But what does ‘rests entirely on the condition of the baby’ mean? So the baby is born to the umbilicus, the heart rate is less than 80 beats per minute, colour is pale but pink, baby cycles so has tone and reflexes, how long do we have? One midwife who lost a baby, said the baby was alive and cycling two minutes prior to its birth (and death), another said she knew the birth was ‘taking too long’ and the baby died prior to the shoulders presenting. How quickly can a baby move into a comatose state and not recover, or were these births true stillbirths?

Communication with Maggie Banks about my queries brought me back to true midwifery mode; if descent is slow at any time either during the body’s descent or the head birth “change the mother’s position”. Of course, just like we would for a shoulder dystocia! I could feel my head and heart accepting the simplicity of her answer. And the reflection by Maggie on the time frame – “maybe 10 minutes, but definitely led by baby’s condition”.

Andrew Bisits’ response; only intervene in a breech birth “if the baby is bradychardic leading up to the birth of the backside and body; if there are clear delays with the delivery of the shoulders or the descent of the body”, “time from umbilicus to head should be no more than five minutes, absolute maximum of 10 minutes” and to encourage progress “our most overlooked ally with these births is effective suprapubic pressure; it is the most effective surrogate for a contraction”. And so these comments provided me with clear parameters and a different management for the head birth if required.

As happens, I have attended six vaginal breech births in the past six months – six in 26 years, then six in six months! One of these included a very precipitous birth where I was called when the membranes ruptured after an irregular early labour followed by three strong contractions. I was called again eight minutes later and told the feet were born. I stayed on my mobile and drove the seven minutes to the birth to find an arm arrested behind the baby’s head and inhibiting descent. There had been perhaps two contractions in this position and, by the time I was in the house and assisted the arm through, which was really tight and difficult, it had been possibly 10 – 11 minutes from umbilicus to head birth. That baby was deeply shocked, was resuscitated and had a first breath at five minutes. She was breathing regularly by 10, with Apgars of 2, 4 and 5 at 1, 5 and 10 minutes respectively, and was transferred by ambulance. She was in a coma for 50 minutes, but then recovered fully with no expected ongoing morbidity.

Another breech baby was born on the floor of a hospital with the obstetrician on his knees. The woman was in a knee-chest position for most of the descent, then moved her torso to be more upright for the actual birth. The baby came through to the neck in about four minutes then we waited ‘for the next contraction’. When I quietly reminded the obstetrician that there may not be another contraction and the mother could simply ‘let her baby out’, he replied that he wanted to wait until the next contraction. The baby’s colour was going off and her tone dropped so I leant forward and asked the woman to ‘release’ her baby, which she did. The baby was moderately shocked and the obstetrician wanted to cut the umbilical cord and remove the baby for resuscitation. The woman refused to allow him to cut the cord but scooped up her newborn and carried her to the trolley, cord attached!

The next breech was in the shower in a hospital, a 36-weeker. He was a complete breech that converted to a double footling breech. He came through from umbilicus to underarms in about five minutes but then hung with his right shoulder visible but no arm presented. It was the end of a contraction – should I wait for another or should I release that arm? I chose to release the arm, thinking of the time frame already used, making the decision to decrease the possibility of taking ‘too long’. The left shoulder then presented and at the end of that next contraction there was still no arm, so I assisted that through as well. The head came through with a ‘release’ by the mother, so the birth was completed in 8-9 minutes from umbilicus, and the baby had Apgars of 9 and 10.

My most recent homebirth, another undiagnosed breech, was a second baby. This labour and birth was very intense compared with the woman’s first birth, and due to the intensity I asked her to do some asynclitic moves to try to bring the baby down (still expecting a vertex baby and assuming the baby was stuck at the brim). She ended up on hands and knees with her left leg extended, which afforded good progress. The baby was a frank breech and this position gave him the room he needed to move into the pelvis. He descended, rotated on the perineum and then came flying through in about one minute – my job then became to slow his head birth as much as I could.

And so my recent birth experiences which followed my desire to gain more knowledge and so reduce my fear around vaginal breech, have given me the answer about my own breech birth. Did my doctor need to extract her arms? I know that he did what he believed that he needed to do. She was moderately shocked at birth and needed some resuscitation. I am very thankful that I did not have a more compromised baby and did not have to undergo transfer or special care procedures.

Importantly, my belief that breech birth is a ‘variation of normal’ has been fully supported. I now feel confident in understanding both normal progress in breech births as well as the management of difficulties in breech births. As a midwife I have no doubt that we need to be as hands off as practical, but I am a firm believer that we need to have our ‘hands ready’, together with our knowledge, skills and intuition, to assist a breech baby through in its perfectly good time.