This post written by Heather Wallace was originally published in Birthspirit Midwifery Journal 2010; 5: 33-36. 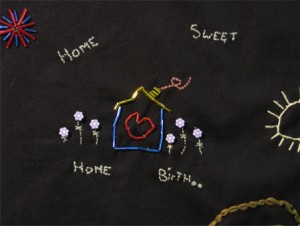 Last year I returned to clinical practice after an extended maternity leave of almost five years. I was concerned that I would be completely out of touch and that my time out from the workforce would result in big black gaping holes in my practice and knowledge base. However I was pleasantly surprised to discover that on return to work as a midwife, rather than be jeopardised, aspects of my practice have actually been enhanced by my labouring/birthing/mothering journey—growth and enrichment as a woman has ultimately resulted in growth and enrichment as a midwife.

Three personal journeys of labour and birth for ‘Heather the Woman’, three ‘key’ lessons for ‘Heather the Midwife’! I share these with you now—with a little bit of ritual, myth and magic around the edges!

It all began with the unification of Europe. My husband Rod and I were driving and camping our way around Western Europe in the early stages of the creation of the European Union. We reached Portugal and discovered that on one stretch of road one was likely to be met by carts being pulled by donkeys, while just around the corner a mammoth vertebrae of freeway awaited completion—Portugal, it seemed, was being hauled into the EU via the Auto strata. This complete overhaul of the Portugese roadways resulted in our trusty atlas being entirely inaccurate, leading to the barney of all barneys between navigator (me) and driver (Rod), and then a long stony sulky silence. To pass the time while not speaking to one another, I read the Spanish Lonely Planet in great detail, and discovered that our drive out of northern Portugal would take us over the border, into Spain and very close to a tiny village with special midwifery significance. Speaking again, we made our way to A Ramallosa, where a medieval bridge spans a deep green river. Legend has it that for hundreds of years women at about 12-14 weeks gestation would visit the bridge, bring offerings to the stone deity in the centre, and ask for a safe and easy passage through labour and birth. It is a beautiful bridge, with its image echoed in a blue and white tiled mural in the centre of the village. I crossed the bridge, made an offering in the centre, asked for a blessing, had my photo taken by Rod and we then continued on our way. But myth, magic and ritual are powerful and often enduring phenomena! 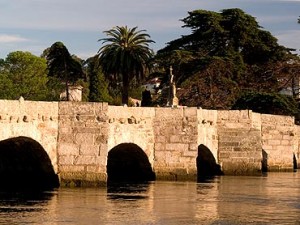 Years later, Rod and I were delighted to discover that I was pregnant. We promptly adopted two standard poodle puppies to “practise” being grown up and responsible. I ‘booked in’ to the Birth Centre of the large public hospital where I was working at the time, plus had ‘shared care’ with an Obstetrician—just in case! I had a Glucose Tolerance Test and Group B Strep swab—just in case, and was quite compliant and unquestioning when the Obstetrician said an emphatic no to birth in water. Having what felt like hundreds of people say to us during my pregnancy “Ohhhh—a midwife married to a doctor—you’re going to have a terrible time in labour” helped to prompt me to do everything I could to optimally prepare for my labour, with lots of yoga and aqua-aerobics. And not to forget—I had crossed that medieval bridge!

My waters broke in the late afternoon of a July winter’s day. There were no contractions. “Right” said Rod “Time to walk”, so gathering poodles we set off along the beach, assuming we were at the beginning of a 24 hour process. Let’s just say that a five kilometre beach hike did a much better job than a truck load of syntocinon, and by the time we got home things were ‘established’. Not wanting to get too excited, conscious of the ‘text book labour’ times described during our education plus the sentiments from all the ‘doubting Toms’, both Rod and I tried to play down the significance of what was happening. Also, I didn’t want to turn up at the Birth Centre and have my friends and colleagues tell me I was only 1cm dilated with a posterior cervix! I tried describing to Rod the ‘anal cleft’ line in an attempt to determine what my cervix was up to. Rod found some kind of line (in hindsight, a knicker-crease), pronounced “two centimetres” and I retreated to the bath. Half an hour later having bowel pressure and having to drop to the ground in ‘child’s pose’ to get through each contraction, still not believing that this was actually labour and worried about being sent home, Rod bundled me into the car and we were off to the Birth Centre. An hour later, in the bath, cared for by a supportive and wise midwife, (the Obstetrician was thankfully detained at a hospital around the corner!), I breathed my baby out of my body and became a mother. As I scooped up my slippery, warm, wet baby, any doubts about the abilities of my body disappeared, and I knew that my body was made for birthing.

A couple of years later it was time for labour number two in a new city at a new Birth Centre. Again, waters broke with no contractions, so off we all went along the waterfront for a ‘kick-start labour’ walk.  With my body slower to come to the party this time around, I called the hospital to let them know what was going on (that is, SROM with no contractions) and what I was planning to do about it (that is, walk!) Unfortunately the midwife (who I did not know) was not happy about a “multi” lurking in the community with ruptured membranes—heavens, my baby could drop out on the footpath! She was all for me being admitted for monitoring and Syntocinon. Thankfully I had become less compliant this time around, plus more ‘trusting of the process’—oh—and don’t forget that bridge! During her lecture on infection, safety, what’s best for baby etc, she let slip that my favourite midwife was starting work at 9pm—suddenly I had a time frame! I bid the unknown midwife farewell, settled back and waited, and yep—at 8.55pm, my contractions started! It wasn’t long before Rod was not happy with me lurking at home, so it was off to the Birth Centre, into the bath and then oh my goodness—the power, the intensity, the ferocity of my labour! Whereas with my first labour I had felt my mind and body work in unison and harmoniously, this time around there seemed to be a real ‘power imbalance’ between the two, with my uterus totally calling the shots. Three hours later I was scooping my baby up out of the water onto my chest for “that” million dollar feeling, Rod was sending the ‘birth announcement’ text message—“No drugs, no doctors, no stitches, no worries”, and I was feeling a little like the Pony Express had travelled down through my pelvis and then turned around and trampled right over the top of me!

With pregnancy number three, I gave up on compliance all together and chose to birth my baby at home. I also resumed my yoga practice, had a friend coach me in some visualisation and meditation, and so ‘returned to the breath’. I felt ready to have my baby at 38 weeks, but had to stall for a couple of days due to Rod having ‘Man Flu’. Finally, it was time. I am nothing if not predictable—waters broke—no contractions—poodles—ocean—walk! Filling the birth pool was an exercise requiring metres and metres of purple hose, two hot water systems and a lot of yelling! Rod was running around hooking the hose up to various taps while I was supposed to be filling the pool. However, because I was bent over the edge of the pool engaging with pelvic rocking and breathing through my contractions, I wasn’t entirely focused on where the end of the hose I was holding was or how much I was sloshing the water over the side. Minor flooding, running out of hot water before the pool was filled and then Rod smashing a window while trying to manoeuvre the hose around some outdoor furniture, all contributed to the “this wouldn’t happen in a hospital” atmosphere! Finally I could get in the pool, breath and let my body do its thing. Things were hotting up—I was working hard, breathing hard and I felt as though I was using every ounce of ‘mental stamina’ to stay focused and effective. As I was reaching what felt like a crescendo, I opened an eye to see Rod bending down toward me and I felt such relief, as I assumed he was reaching down to talk me through my contractions and help me chant the special mantra we had devised together for this very point of my labour—what a lucky woman I was to have a partner so ‘in tune’ with what I was up to and just knowing when I needed that extra bit of encouragement and support! As his lips grazed my ear and I waited for those special words, he said “I’m just going to chop the wood”! Needless to say that was not the mantra! He went and chopped the wood, I got on and birthed my baby! Although it has been nicknamed the ‘Faulty Towers of Home Births’, in all seriousness, to have had the opportunity to birth at home and all that that entails, has been a most empowering, rewarding and enlightening experience.

Later this year I will be returning to the ‘Bridge of Good Labour’ in A Ramallosa. This time, I will take my three water babies with me. I aim to share with them the significance, myth, magic and ritual associated with the bridge, and as a result how it fits in to their personal stories. In the centre of the bridge I will give thanks for my birthing experiences and blessings, and then I’ll cross that special bridge—a little bit older, a little bit wiser, with a whole lot more water under than a decade ago! A woman and a midwife, enriched by becoming a mother.