In this post, originally published in Birthspirit Midwifery Journal 2010; 5: 19-22, Avon Lookmire, now a registered midwife, discusses how the current ‘stages of labour’ do not reflect women’s experiences of labour, and she shares her ideas of how the process may be reframed.

Like me, my sister Leith is a compulsive writer, and recently presented me with the first draft of her “birth musings” (a nice variation on a ‘birth plan’). From among the many pages, one part in particular stuck with me: she described how during her first birth, the model of ‘the three stages of labour’ disempowered her immensely, and disregarded her long and arduous journey. She wrote:

I think I really wanted to be told I was amazing and that my labour was progressing super well. The language around birth is enormously unhelpful here. It’s not easy to celebrate progress and ‘go with’ the process of birth when you’re defined as ‘at the start’ for hours and hours (“first stage”). I didn’t realise at the time, but one of the biggest messages I got from my preparation for Juna’s birth was that I was aiming for 10cm dilation and nothing important or interesting would happen until then. In that context, examinations to estimate dilation are almost inevitably disheartening … Perhaps I’d like to re-language this birth, with a more sensible range of stages to reflect the work I am doing birthing my baby … Perhaps Avon and I can break labour down into a dozen or so meaningful stages with images to help me visualise these and work with my body?

Meaningful stages of labour? I had never before considered it, but she had a good point. Still, consumed by midwifery study and practice, I filed this challenge away for a less busy time. Soon after, however, I was dutifully working my way through the ‘learning outcomes’ of Biosciences for Midwifery when I was confronted with the question “Define the three stages of labour”. It seemed like fate. Were there really concrete stages of labour that could be defined?

I started reading through the relevant section of my textbook, but Leith’s challenge was pulling at me. I paused and pulled out a scrap of paper and idly wrote along the top ‘The Many Stages of Labour’.

Still half pretending to read the required section, I started to jot down all the stages of labour that are not given names or status within midwifery. They came surprisingly thick and fast, so obvious yet so unspoken. After adding a number of stages I returned to the title and used a little arrow to add another word, so that it read: The Many (Glorious!) Stages of Labour. 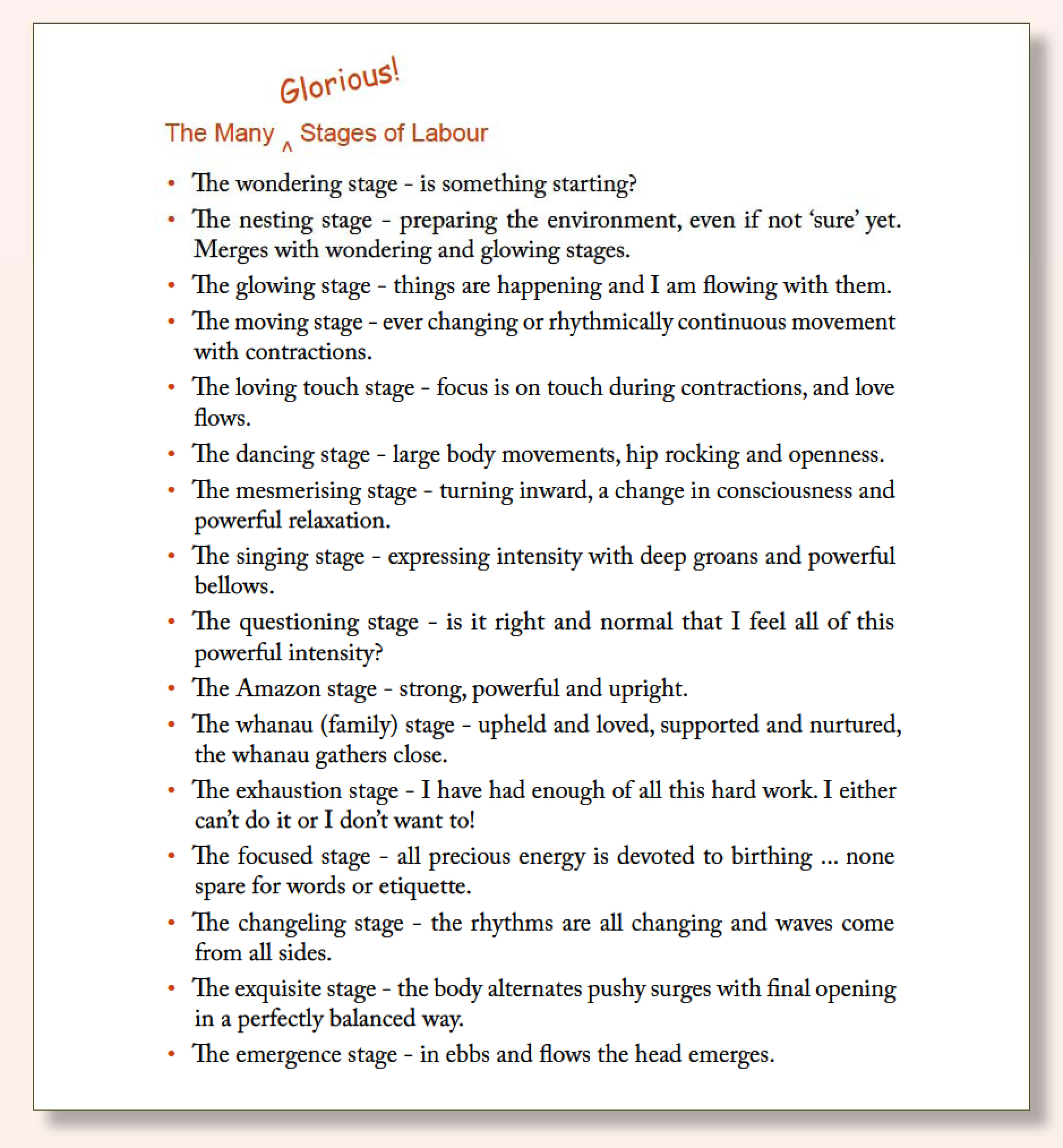 That night I presented them to her, and she loved them. There were so many to choose from! She could try out a new one every hour, or more! In particular, though, she noticed that these were things she could do, so that the stages of labour became not just something ‘nature’ or obstetrics imposed upon her, but something she could be an active part of.

The three stages of labour seem to be one of those pieces of midwifery knowledge that remain central to the way we talk about birth, despite having limited usefulness or validity. Other contributors to this journal have pointed out, for example, the inaccuracy of recording ‘full dilation’ or ‘beginning of second stage’ based on when the midwife performed a vaginal examination rather than when a real change in stage took place within the woman Wickham (2009). Similarly, Walsh (2007, p. 35) argues that “the division of the first stage of labour into latent and active is clinician-based and not necessarily resonant with the lived experience of labour”.

So one has to ask: why would we come up with a system of describing labour that does not accurately portray what is really taking place? Furthermore, if the three stages model of labour is “clinician-based”, is it actually useful to clinicians such as midwives in practice?

It seems that the ‘three stages’ model of labour has its roots in the mid-twentieth century when the ‘active management’ of childbirth became commonplace in hospitals Banks (2000, p. 39). In order to apply the strict time limits that were deemed to characterise ‘normal’ labour, discrete beginning and endpoints were needed, and hence labour was “compartmentalised” into stages Banks (2000, p. 39).

Many aspects of the ‘active management’ of labour have been challenged, for example, breaking of the amniotic waters removes an important protection mechanism for the baby from intense contractions, and increases the risk of infection, particularly in combination with frequent vaginal examinations Romano & Lothian (2008); Dixon (2003).  The practice of defining the second stage by cervical dilation so that the midwife can direct the woman to push, while simultaneously limiting the time for which she will be ‘allowed’ to do so, has been critiqued by many authors Wickham (2009); Sutton (2000); Walsh (2000),  yet this is the essence of the three stages model of birth. While it gives the impression of objectivity and order, it is really highly subjective, even manipulative.

The three stages model of birth has its foundation in the belief that the expert knows best. Thus, as Leith noted:

Pregnant women are led to doubt their right to say when they are ‘in labour’. There doesn’t seem to be any clear-cut definition, and women are gently mocked by health professionals and loved ones if they are brave or foolish enough to make the judgement themselves.

Walsh describes this phenomenon as a way in which midwives balance what women tell them against what is expected and acceptable within the obstetric model of birth Walsh (2007, p. 35). To put this more bluntly, midwives ignore or misrepresent women’s descriptions of labour so that their labours can be fitted into a pre-defined model, which is then further reinforced as being ‘normal’! Miller (2009).

It seems hard to imagine any benefit of this system to birthing women, whose lived experiences are swept aside and replaced by ‘expert’ measurements of what ‘really happened’. Furthermore, the three stages of labour seem to have little practical use to midwives unless they are following a strict ‘active management’ approach to labour. Indeed, it appears that significant effort may be expended by midwives in their attempts to fit all births into an acceptable obstetric box.

Therefore, this alternative set of stages is presented, not as a definitive list, but as a starting point for a change in consciousness regarding labour progress. As Leith so eloquently described, the stages we use to describe labour should be meaningful, and should reflect their power, their intensity, and their challenge. There is so much scope for detail and meaning when describing the life-changing process of birth, surely we can do better than ‘one, two, three’!

In conclusion, as a home birth mother-of-two and student midwife, I do feel that my perspective shifts and alters as I learn new things and adopt a midwife’s point of view. This is inevitable – perhaps essential – but also limiting if there is not a corresponding pull towards a birthing point of view providing a healthy counter-tension. I am so grateful to Leith for giving me this new perspective on the stages of labour, and for reminding me about the importance of words.