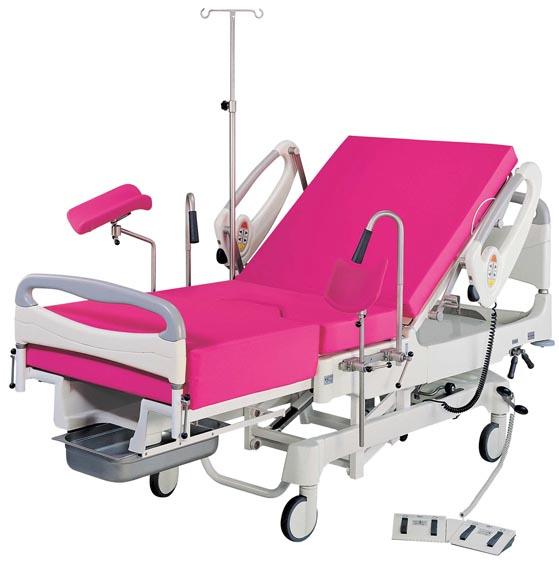 Bedbirthing has predominated in Western countries reputedly since it gained acceptance after Louis XIV’s mistresses birthed in bed; the king covertly watched from behind a curtain Glasscheib (1963, p. 91). American anthropologist, Wenda Trevathan, reports that a minority of cultures prefer to lie during birth; of 159 cultures, 47 prefer sitting, 44 kneeling, 26 squatting, 17 semi-reclining or in a hammock, 16 lying down and 9 standing Rosenberg & Trevathan (2002). This low preference for lying down or semi-reclining during birth, except when in a birth pool, has also been my own and other home birth midwives’ experiences. Yet, the obstetric bed remains commonplace in maternity facilities in New Zealand despite evidence that walking and upright positioning in labour shortens labour and women are less likely to use epidural anaesthesia Lawrence et al (2009).

I have constantly observed the intuitive movements women in labour make to exaggerate their spinal curvature which, as we know, is already increased in late pregnancy from the non-pregnant state. This observation, amongst other things, has led me to believe that obstetric beds should be viewed as hazardous furniture that hinder women’s intuitive movements during labour and birth, and that we need to recognise the role obstetric beds play in bed dystocia.

What Is bed dystocia?

Bed dystocia is the entrapment of the woman’s pelvis against the unyielding metal base of the obstetric bed and its thick PVC covered mattress, which combines to prevent progressive descent of the baby. This may occur for two reasons. Firstly, weight bearing applies direct pressure on either the ischial tuberosities (sit bones) and/or the sacrum when sitting or lying down. Secondly, semi-reclining and supine positioning tilts the pelvis backwards to reduce the accessibility of the pelvic brim to the baby’s shoulders, in particular.

Bed dystocia is distinguishable from shoulder dystocia in both how the baby is freed from a ‘stuck’ position and the responses of the woman when she is not receiving epidural anaesthesia.

Shoulder dystocia will require vigorous rocking by the birth attendant of the baby’s shoulder up, over and off the pubic bone if stuck at the brim, and/or facilitated birth of the posterior arm and/or turning of the baby’s shoulder through internal rotation – the latter two actions applying also if the baby is stuck in the mid pelvis. During shoulder dystocia the non-medicated and (normally) uninstructed woman will be agitated. If off the bed and on her hands and knees, she is likely to shift her weight from one knee to another, arch her back and/or swing her hips in exaggerated rocking movements from side to side. She may also lift one knee up and out to the side as a forerunner to her attendant’s instructions and actions, or push over her pubic bone in an attempt to dislodge the baby’s shoulder herself.

In the case of bed dystocia, once the cause of the problem (the backward tilt or neutral position of the pelvic brim and sacral weight bearing on the hard bed surface) is removed, the problem will resolve. This is achieved by turning the woman onto her hands and knees or by using the exaggerated stranded beetle position (hyperflexion of the woman’s legs onto her chest in a back-lying position). As Gherman and others have clearly demonstrated through x-ray pelvimetry of women who were at least 37 weeks pregnant, this McRoberts’ manoeuvre, which employs hyperflexion of the legs, does not change the actual dimensions of the woman’s pelvis; the position straightens the sacrum relative to the lumbar spine, and the symphysis pubis slides over the unborn baby’s shoulder Gherman et al (2000). It is a correctional technique used to release the entrapped sacrum held by the woman’s weight on the bed against a firm mattress and bed base.

It is the widely variable reported incidence of ‘shoulder’ dystocia (0.2 – 3.0 percent of all vaginal births Gherman et al (2006), along with the effectiveness of the McRoberts manoeuvre alone as a correctional technique in 42 percent of ‘shoulder’ dystocia cases Gherman et al (1997), which may give the best clue as to the real cause of the ‘stuck’ baby.

The woman in a forward leaning position, whether that be on all fours or leaning, for example, on the edge of the birth pool or over the kitchen table almost universally uses the floor as her ‘anchoring’ surface (Figures 1-3), including when she is in the birth pool.

This forward leaning accentuates the spinal curvature and opens the angle of the pelvic brim as the pelvis is tipped forward to enable the baby’s head to enter the pelvis if it has not already done so prior to labour, and enables his shoulders to pass through the pelvic brim.

Women are intuitively drawn to exaggerate this spinal curvature as labour progresses. While this can be achieved by a hanging squat with her partner’s support, as in Figure 4, I have seldom observed women intuitively use this position. Perhaps they feel freer to ‘hang’ when they are not worried about others bearing their weight, or perhaps getting into a partner-supported hanging squat requires conversation at a time in labour when many women do not use language to communicate.

Once she deepens her squatting action (Figures 5 and 6) she begins to deploy the leverage that her upper legs (femurs) exert on the hips to widen the mid pelvis and flatten the pubic arch. In each of these positions the brim of the woman’s pelvis remains tilted forward and all diameters of the mid pelvis and pelvic outlet are increased Russell (1969), (1982); Michel et al (2002).

Women who are working hard to deal with ‘bony’ pain in labour as baby moves through the pelvis, intuitively adopt positions such as the ‘exaggerated runner’s start’ (Figures 7 and 8), leaning one way or the other to increase leverage on the hips (Figure 9) and widen both the mid pelvis and the pubic arch.

Women on the floor do these intuitive movements without consideration of either falling off a bed with their (sometimes) sudden movements, or that they will run out of surface area to place their knees and feet wide apart. The midwife, having witnessed this primal drive to move in labour that non medicated women exhibit, will have no doubt about the inherent dangers of the obstetric bed.

During my time as a student midwife in the late 1980s it was common to hear the expression “You can swing from the chandeliers if you want!” during the ‘booking in’ visit at the obstetric hospital. This comment was intended to imply support for woman-led positioning in labour and birth. The hospital lacked chandeliers, and it also lacked any furnishings to support active labour and birth. Rather than birth pools and balls, hanging ropes, floor mattresses and comfortable couches, the layout of the room had an obstetric bed centrally placed, a nightingale table on roller wheels straddling the bed, a standard issue hospital locker beside the bed and a vinyl armchair in one corner. In short, a hospital room by any description, designed for the sickness model of care with an incapacitated ‘patient’ lying in bed.

The obstetric bed remains entrenched in maternity facilities, whether that is an obstetric hospital, a midwife run or midwife owned and operated facility. As long as obstetric beds remain in the birth space, women will continue to be given a very strong, unspoken message that beds should be used for labour and birth.

Resistance to ‘normalising’ the birth space is as prevalent in midwives as it is in nursing and obstetric staff, even when managers of primary care facilities try to create more appropriate spaces for labouring women. In Elaine Hodnett and colleagues’ Hodnett et al (2009) Canadian study of ‘ambient clinical environments’, the first three hospitals the researchers approached to be in the study refused to participate because the usual obstetric bed would be replaced with a double floor mattress, large pillows and a birth ball. In one of the two teaching hospitals which did participate, “considerable resistance” was encountered from senior nursing staff who “strongly objected” to the trial. The authors surmised: “Although lip service is paid to the benefits of upright positions, freedom of movement, and ambulation in labour, many staff members seemed certain that the bed was the safest place to be…” Hodnett et al (2009, p.166).

Midwifery rhetoric frequently supports women’s choice of birth position but the reality can be very different. Regina Coppen (2005) surveyed 66 UK midwives on their views on birthing positions; these midwives worked in a facility with 2000 births per annum (p. 80). The midwives identified the most frequent position for birth as recumbent or semi-recumbent on the bed and, most frequently, cited woman’s preference as the reason for this (p. 102). However, in her discussion on the findings, Regina notes:

Continuity of carer does not necessarily ensure that women’s choice of birth positions will be influential. de Jonge et al (2008) used six focus groups in the Netherlands to study the views of 31 independent midwives on position during birth. These midwives practised in different parts of the country in rural, semi-urban and urban areas, providing primary care at home or in hospital. These researchers found women often gave birth in the midwife’s preferred position, which was dependant on the midwife’s exposure to different positions in her training and practice, the midwife’s knowledge and skill, her routine practice and the amount of her experience.

Being active, rather than reclining on an obstetric bed during labour and birth, is a central concept of the natural childbirth movement. One could well have expected that for all but the very small minority of women whose poor health precludes them from being active in labour, the obstetric bed would certainly have disappeared from hospitals and that it would be absent in primary maternity facilities. Instead obstetric beds remain standard issue in these environments for women who are well and who have the potential to experience labour and birth as a healthy life phase.

Maternity facilities are the ‘homes’ of the midwives, doctors and nurses who work in them, despite the fact that there may be considerable instruction to the woman to ‘make yourself at home’. Locked cupboards and secret coding systems on doors do not give free access to food and equipment as a woman would have in her own home. Social conditioning prevents overt ownership of the environment, and instructional messages about keeping doors closed, the cleaning and replacing of equipment, fire drills (and so on) clearly signify this is a public space controlled by an authority other than the woman. Any attempt to remove the obstetric bed can be treated as a major transgression, as my own recent experience showed.

In our role as facilitators of the physiological birth process, midwives need to examine the environment that they provide for women during birth. Intuitive positioning is not supported in the hospital or birthing unit environment where, rather than reflecting home furnishings, an environment of sickness and incapacity is replicated. Midwives need to take a proactive stance and ensure that at least 85 percent of any facilities’ rooms reflect home furnishings. Until midwives permanently relegate the obstetric bed to the hazardous goods lock up and replace it with home-like furnishings – sofas, divans and floor mattresses – the obstetric bed will continue to be seen as appropriate birth furniture.

Special thanks to Niki Carroll and the late Bruce Cleland for the generous gift of photographs taken the week prior to the waterbirth of their daughter Amber Lily at home, as planned.