Midwifery ethos demands that while remaining mindful of a woman’s ‘birthing potential’ WHO (1998, p. 2) and that any number of eventualities can arise, we nurture the physiological process of birthing in the absence of problems. However, in an ever increasingly medicalised childbirth culture, women experiencing twin pregnancies, some 1 in 80 women, can find it difficult to access support for natural childbirth. At the far end of the spectrum, as one woman related of her initial phone call to a potential caregiver, twins can be seen as “double trouble” requiring automatic induction of labour at 37 weeks, complete with epidural anaesthesia to enable expediting birth of the second twin. Amongst the many decisions that need to be made in relation to birth and care planning is the ‘management’ of birth of the second twin. This post discusses one component of this, namely, the time between the births of the first and second twins, that is, the inter-birth interval.

MATERNITY by Llew Summers
Presented to the City of Upper Hutt in recognition of The Year of the Child 1979
(Photographer: Tony Banks)

Accepted norms and paucity of evidence

There is a generally accepted hypothesis in obstetrics that reducing the time between the births of twins is beneficial and, preferably, should be no more than 15 minutes and should not ‘be allowed’ to exceed 30 minutes Siddiqiu & McEwan (2007) . In the case of term twins with completely separate amniotic sacs, this is primarily, but not exclusively, to reduce the incidence of hypoxic insult to the second twin. Time limits can give rise to a recommendation that labour is sped up by the use of drugs, instruments and/or manipulations of the baby, interventions which may increase perinatal morbidity in themselves, and interventions with which all ‘experts’ do not agree Siddiqiu & McEwan (2007).

Rayburn et al (1984) noted few studies challenge the commonly held inter-birth interval guide and that as early as 1975 it was reported, “the inter-delivery interval does not have any significant effect on the perinatal mortality of second twins” (p. 505). These authors reported a retrospective data review of four regional perinatal centres with 115 women with live-born twins at 34 weeks gestation or more. The inter-birth interval ranged between 1-134 minutes with 15 percent of second babies born >30 minutes after the first. All these infants had Apgar scores between 8-10 at 5 minutes. 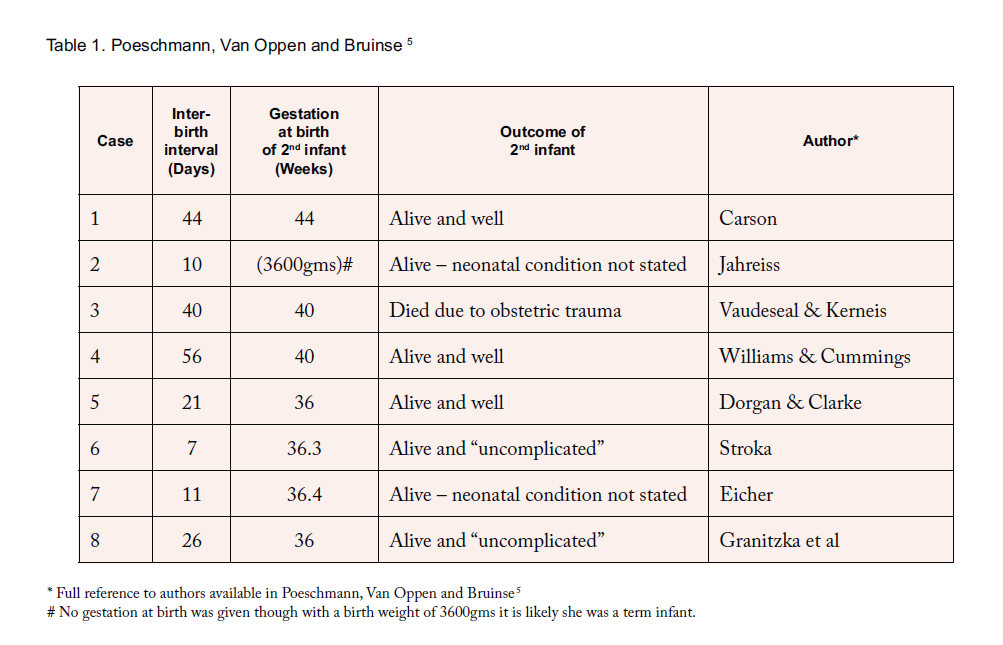 As such, while acknowledging that considerable birth intervals do not increase morbidity, this literature may have no bearing for inter-birth intervals where labour starts at term.The midwifery literature does little to answer the question of inter-birth interval when obstetric time frames are uncritically accepted, the issue not addressed at all (see Khalil & O’Brienre (2007); Page & McCandlish (2006, pp. 187-201) for respective examples of this), or only occasional cases of inter-birth intervals of between 1 to 8 hours are published, for examples Noble (2003, p. 264); Anonymous (2003); Sawyer (1996). Even Anne Frye’s (2013) well regarded comprehensive text reports minimal midwifery experience of inter-birth intervals (averaging 1-1½ hours), but she does reflect that time between babies is not critical if there is no bleeding, the baby’s heart tones are fine and the mother is well and happy.

Perhaps the most informative case at term is that reported by Sütterlin et al (1999). An interval of 9 hours and 19 minutes in a twin pregnancy at term followed the birth of the first baby. Artificial rupture of membranes had been performed following the first twin’s birth which resulted in the cervix closing down from full dilation to 5cms dilation. Despite a continuous oxytocin intravenous infusion at maximum dose, uterine activity did not return until eight hours after the birth of the first baby. The second twin was born with Apgars of 9 and 10 at 1 and 5 minutes respectively, and the baby’s neonatal course was reported as “uneventful”. Significant in the decision-making around this birthing was the wish of the mother to wait for a return of her labour.

The information women are given on any recommendations for birthing with twins needs to include the facts that there is a “serious lack of sound evidence upon which to base decisions” Hofmeyer & Drakely (1998, p. 91); Ayres & Johnson (2005) and that the higher incidence of foetal and neonatal complications and mortality associated with twins is attributable to prematurity and its associated problems, rather than simply being a twin per se Rayburn et al (1984); Poeschmann et al (1992). In discussing published accounts that do exist, women also need to be cognisant with the reality that it is likely that accounts with good outcomes are more likely to be offered for publication than those with poorer outcomes.

Finally, we must give women the opportunity to contemplate collective wisdom which gave rise to the statement, “for either twin(s), the indication(s) for any intervention should be convincing [and], compelling …”  Barrett et al (2000, p. 10), as an optimal time between the births of twins has not been established and there is ongoing controversy surrounding labour and birth care with a twin pregnancy Barnett & Ritchie (2002).

Extended text of the classic Having twins and more, written by Eizabeth Noble (2003) is available here.